Mexican Caribbean Fishing Calendar: Where, When, and What to Hunt

Fishing in Cozumel is one of the island’s most popular attractions.

Each year, thousands of people travel to the island to take part in the sacred ritual of going for the big one.

At Spearfishing Today, we offer fishing charters departing from six different locations, one of which is Cozumel (it’s where we got our start).

Of course, are charters come with a twist: instead of using a rod and reel you have to rely on your hunting abilities as you dive down into the Caribbean Sea on just one breath.

And being a good shot.

With spearfishing, there’s no by-catch and what we catch we eat.

Moreover, none of our fishing charters ever fish in protected areas or species that are either prohibited or should be.

Fishing in Cozumel & the Riviera Maya 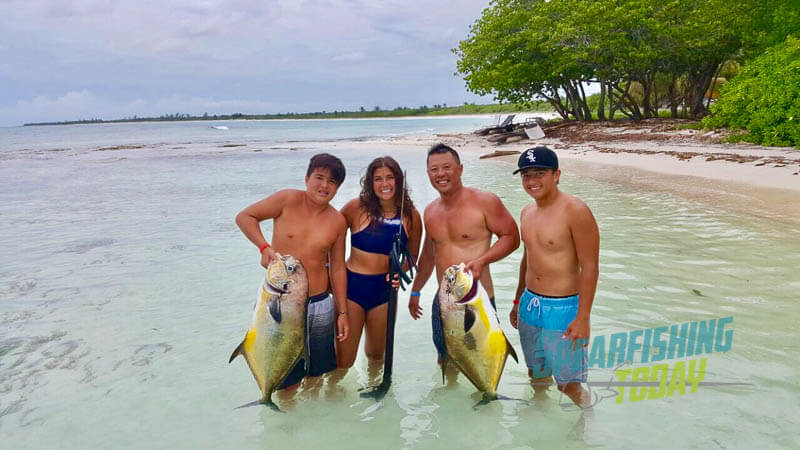 In Cozumel & the Riviera Maya, a.k.a. the Mexican Caribbean, there are several different types of fishing charters:

At Spearfishing Today, we offer the first two: spearfishing and deep sea fishing.

However, if you’re an avid fisherman or fisherwoman, you won’t go wrong no matter which way you prefer to fish.

Of course, we’re more biased toward spearfishing, which we consider the most sustainable, ethical, and challenging form of fishing.

But no matter how you choose to fish, Cozumel and the surrounding cities and towns up and down the Riviera Maya provide the ideal backdrop for your next aquatic adventure. 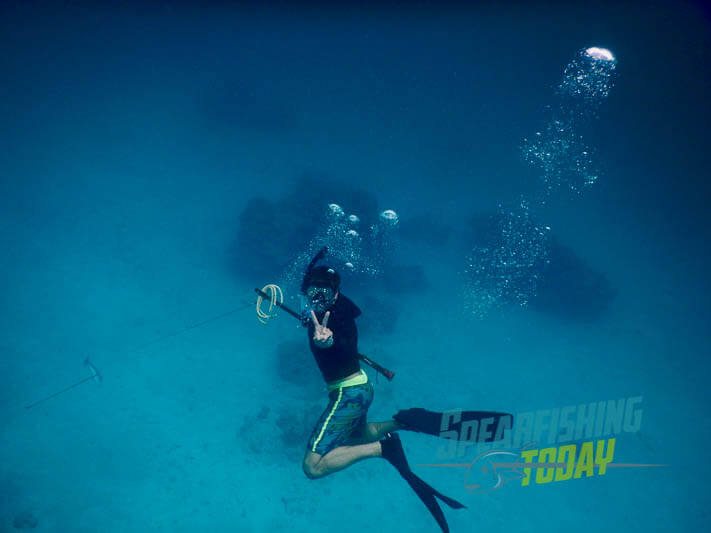 While this article focuses on Cozumel, which is where Spearfishing Today was born and bred (BTW: our ten year anniversary is coming up in 2018), our spearfishing destinations offer almost exactly the same hunting opportunities no matter where in the Riviera Maya you are staying.

The only difference, perhaps, is Holbox, which is located at the point of convergence between the Gulf of Mexico, Atlantic Ocean, and the Caribbean Sea.

Holbox fishing offers up some different opportunities and challenges, and it is one of the best places in the world for tarpon fly fishing.

In consequence, when consulting our fishing calendar, please take into account that it is meant for the Mexican Caribbean.

Fish Identification: Where, When & What to Hunt 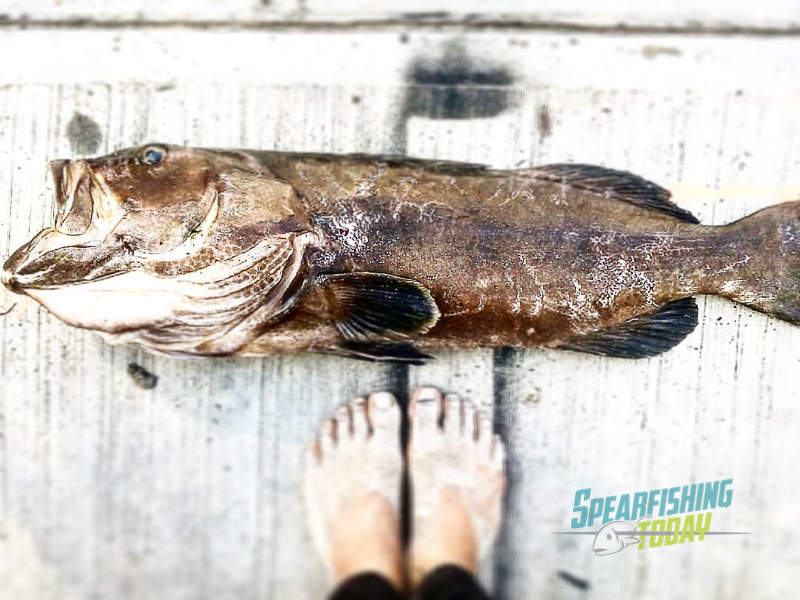 We are going to break this down as follows:

We will provide a brief description of each fish as well as the following information:

Because our fishing charters are focused on spearfishing, we will focus on the fish that we hunt.

There are other species that can be fished. However, always make sure that it is okay to fish each species and remember that some, such as blue marlins, are catch and release only.

These are the fish we hunt in Cozumel:

At the end of the article, we’ll lay it out for you in a simple table as a fishing calendar for Cozumel and the Riviera Maya.

So here it is. Without further ado.

Our list of fish. At the end of the article, leave us your comments about which fish you prefer to hunt and which one is your favorite to eat.

Also known as the pennant fish or a threadfin trevally, the African Pompano can be typically found in warm, tropical waters. Whereas adult African pompanos can usually be found closer to the shore, juveniles tend to be more pelagic, meaning that they tend to float with ocean currents. They enjoy depths of up around 30 to 50 feet and can often be found around the reefs and shipwrecks in the area. 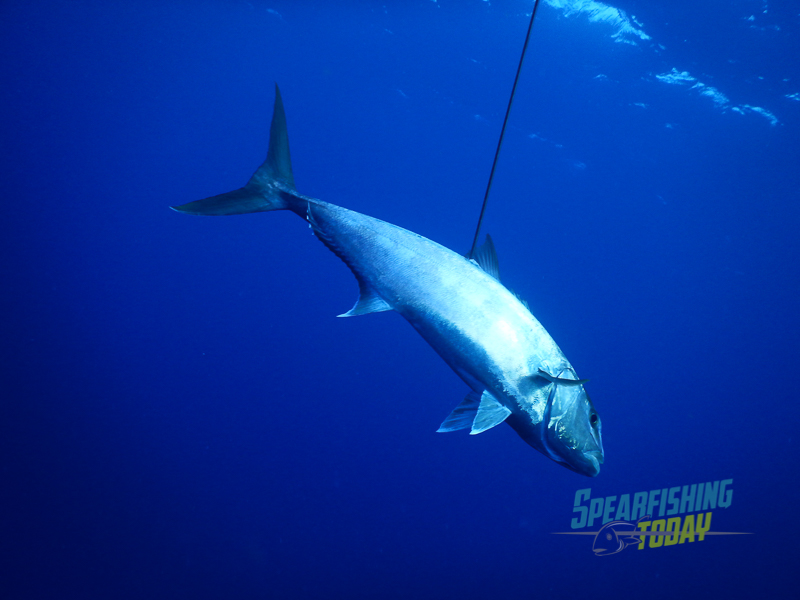 Amberjacks are the largest of the jack family and can be typically found around shipwrecks and rocky reefs at a minimum depth of 30 to 50 feet. The can also sometimes be found near the surface, especially around floating objects. Amberjacks travel in schools so where you find one there will normally be others. 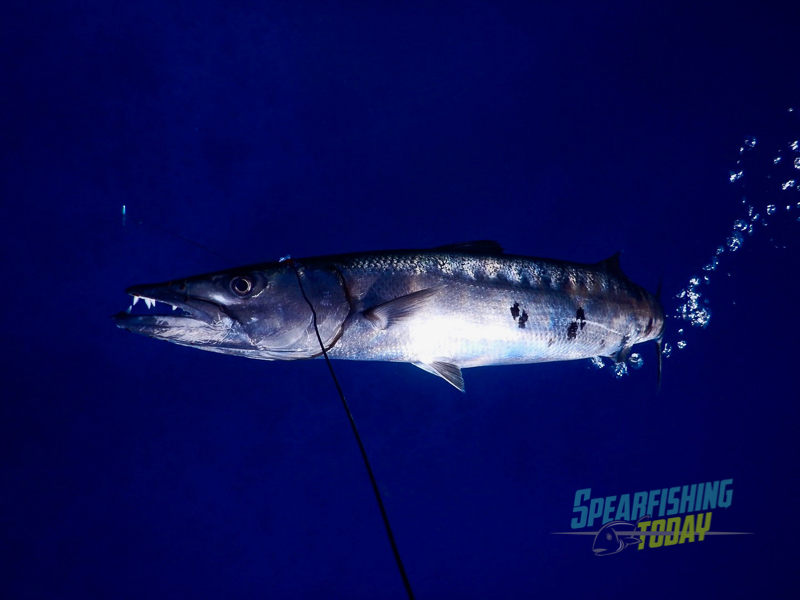 Barracudas are one of the most common fish to be found in the Mexican Caribbean and can grow to impressive sizes. Barracudas are a mostly solitary species. They’re fast and boast sharp teeth, making them ferocious predators if you happen to be on the other end. 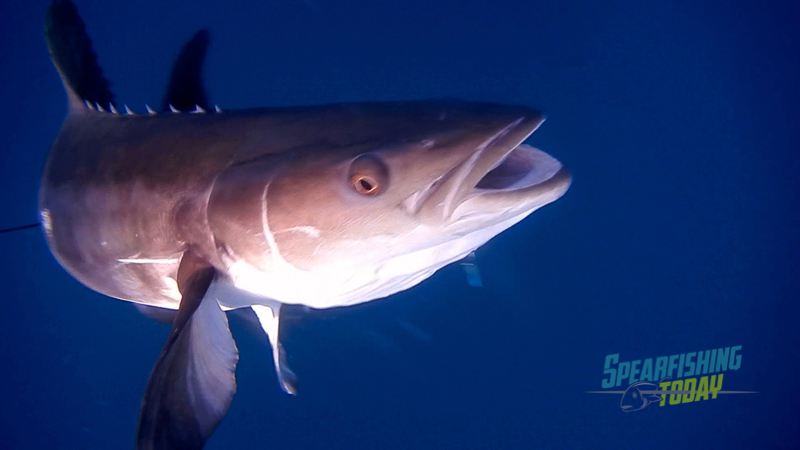 While Cobia can also be found in the Caribbean Sea, you’re more likely to find them in the waters around Holbox Island. Cobia can grow to be very large and are excellent game fish. They generally tend to be a solitary species, though it’s not uncommon to occasionally find them in small schools. This species is often near bays, inlets and underwater structures such as shipwrecks and buoys and can be found at the surface as well as depths up to 100 feet. 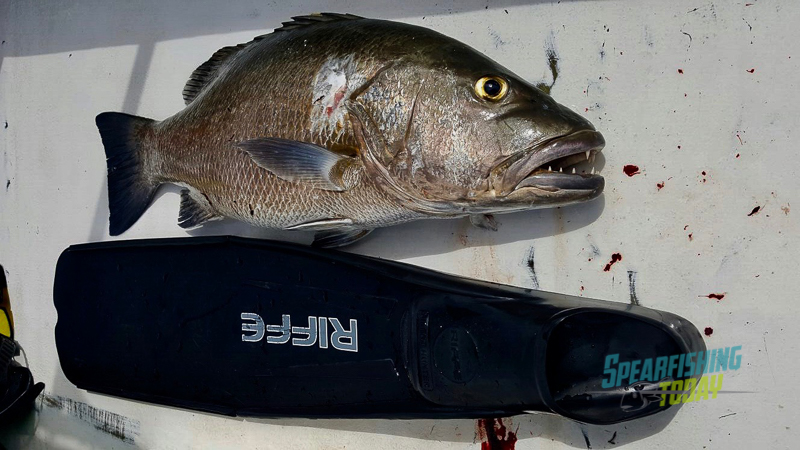 With sharp, canine-like teeth, Cubera snappers are the biggest and the baddest of the snapper family. This species tends to be found in deeper waters, at depths normally starting about 60 feet. Solitary, they can be found both offshore and nearshore around ledges, reefs, and shipwrecks. The younguns tend to roam in schools and can be found closer to the surface. 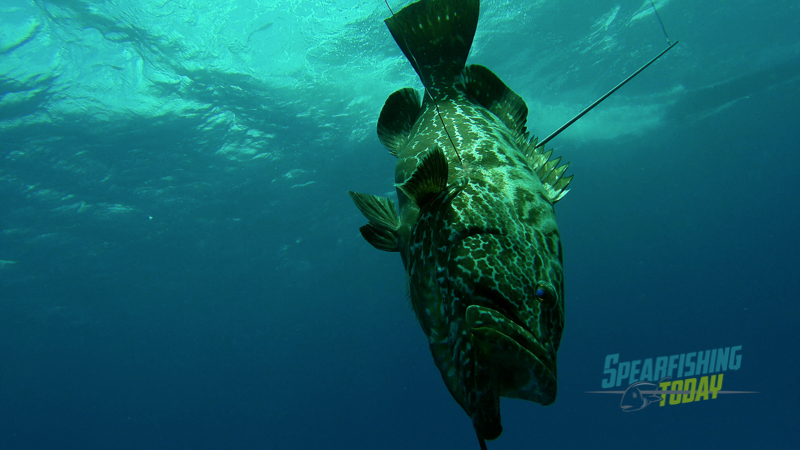 Nicknames “freight train,” Black Grouper is a common and popular species in the Mexican Caribbean. They tend to be found at rocky depths beginning around 60 ft., particularly around caves, drop-offs, and reefs. However, sometimes you can find them on their lunch break sunbathing in the sand and more shallow waters. Note: grouper season in Mexico is not open in March and December. 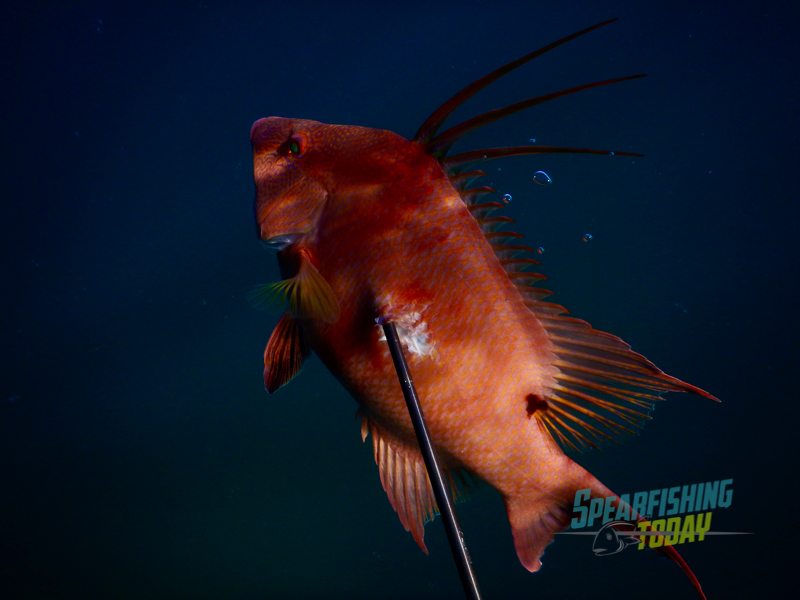 With their characteristic pig-like snouts and hermaphrodite nature, hogfish are typically found in small groups around reefs beginning at around 10 feet. This is one fish that is almost exclusive to spearfishing, as catches by other types of fishing are rare. Hogfish tend to be bottom-dwellers, where they search for their food in buried sediment. 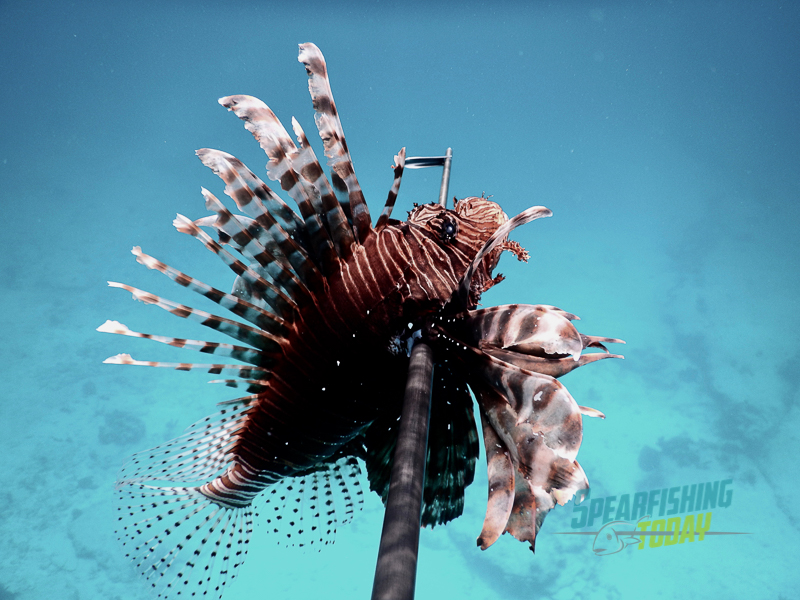 Lionfish are the fish we love to hate and hate to get stung by. These Caribbean predators are known for eating other species of fish which are vital to the ecosystems of the coral reefs. They can be found around rock formations and coral reefs at depths up to 150 feet. If you’re not sure how to hunt these venomous creatures, you’d best leave it to someone who does. 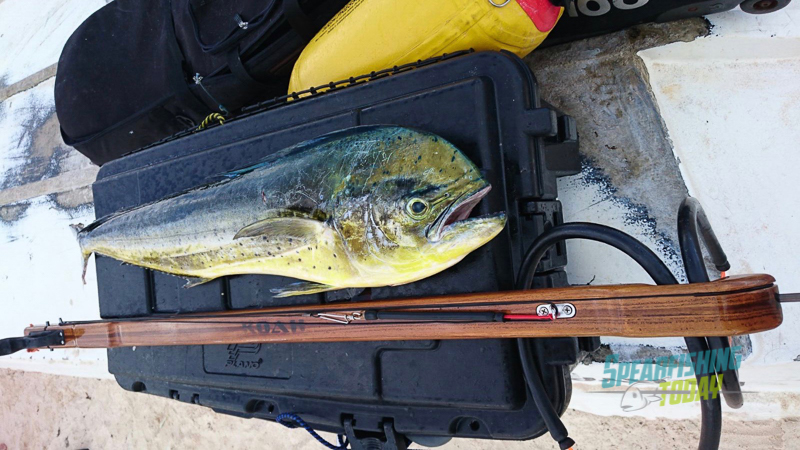 Also known as dolphinfish, their Hawaiian name of mahi-mahi provides a much better description of these famous fish. Meaning very strong in Hawaiian, mahi-mahis are more Mohammed Ali and less Flipper. This beautiful species with their elongated heads can be found in tropical and temperate waters worldwide. A migratory species, they travel in schools and can often be found at the surface hunting themselves for food around algae, buoys or ocean debris. They can also be found around reef edges at depths up to 120 feet. 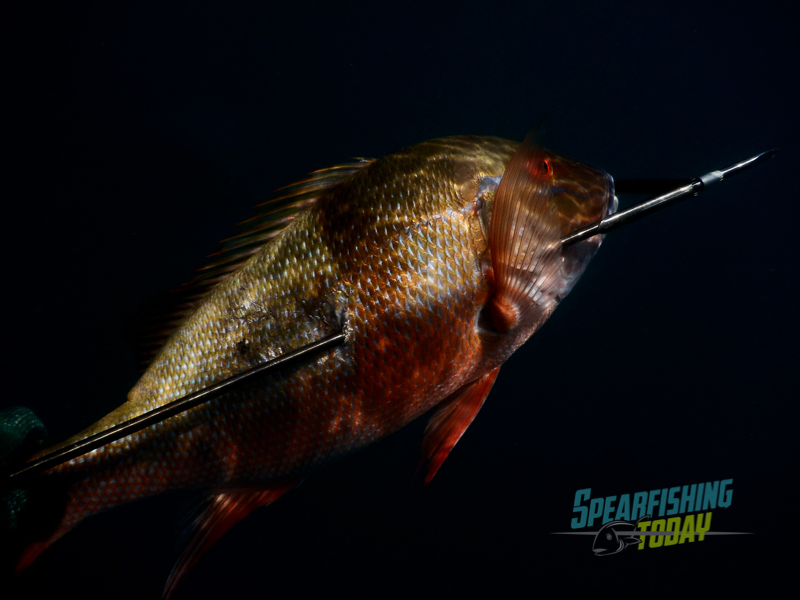 The king of their species, the Mutton Snapper are not only beautiful; they can also be found in a variety of waters both deep and shallow. Their preference, especially the adults, however, is being alone around rocky bottoms, coral reef formations starting at around 80 feet of depth. 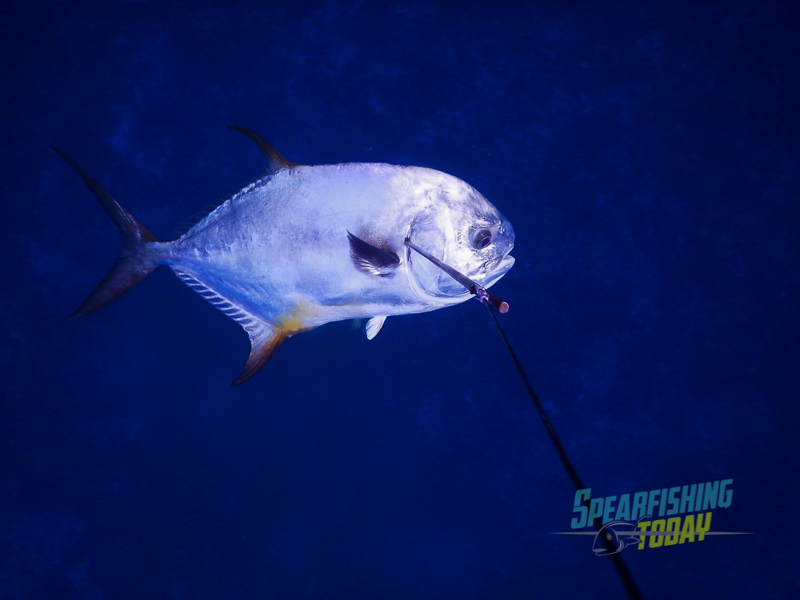 Permits always make a great catch and can become fairly large in size. This species mostly travels in schools, although the older permits tend to be more solitary. Because they can often be found in more shallow waters around reefs and shipwrecks, permit fish are more accessible for spearfishing beginners. However, the fact that they can be found at more shallow depths does not mean that they are easy to catch, especially when solitary. 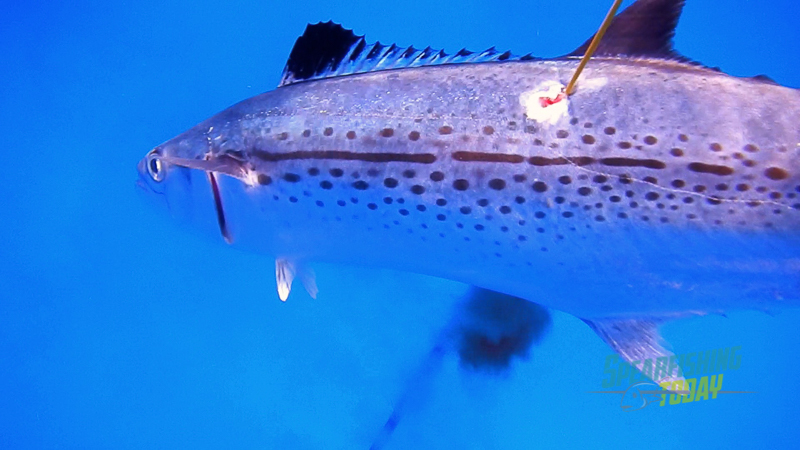 Spanish mackerels are a running species, i.e. they’re always on the move. They can often be found in open waters and around coastal structures such as shipwrecks and coral reefs at depths of 50 to 100 feet. They like murky water, water with thermoclines and color differences. They like to travel together in small groups, but not in big schools. If you want to hunt a bigger mackerel, which can way up to 100 lbs., you’ll need to dive deeper. 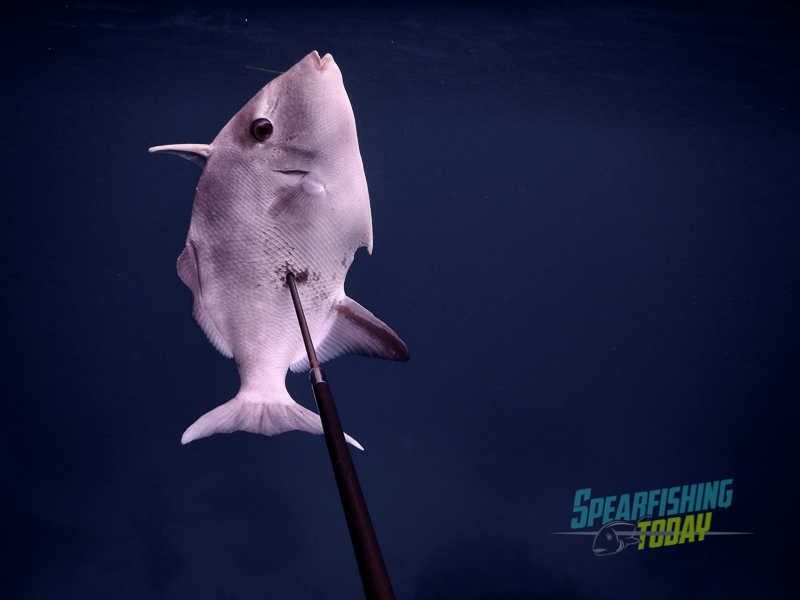 Triggerfish are abundant, especially off the coast of Cozumel. They are one of the easier spearfishing targets for beginners. Triggerfish can be found in shallow water around buoys, reefs, and shipwrecks, but also at depths of up to around 180 feet. Plus, they taste great. 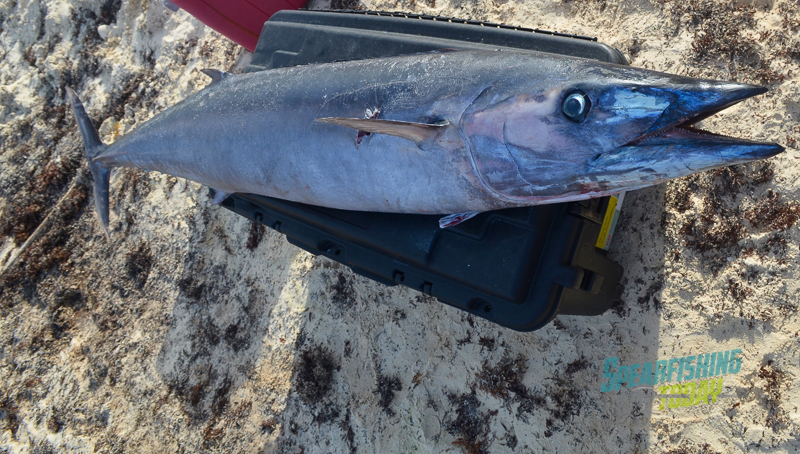 Wahoo, known as Ono to spearos in Hawaii, is a fish found in tropical and sub-tropical waters worldwide. They form part of the mackerel, tuna, and bonito family. Wahoos are lightning fast, making them difficult to hunt. If you do manage to spear a wahoo, be ready for a long, hard run. And some delicious fish from sea to table. 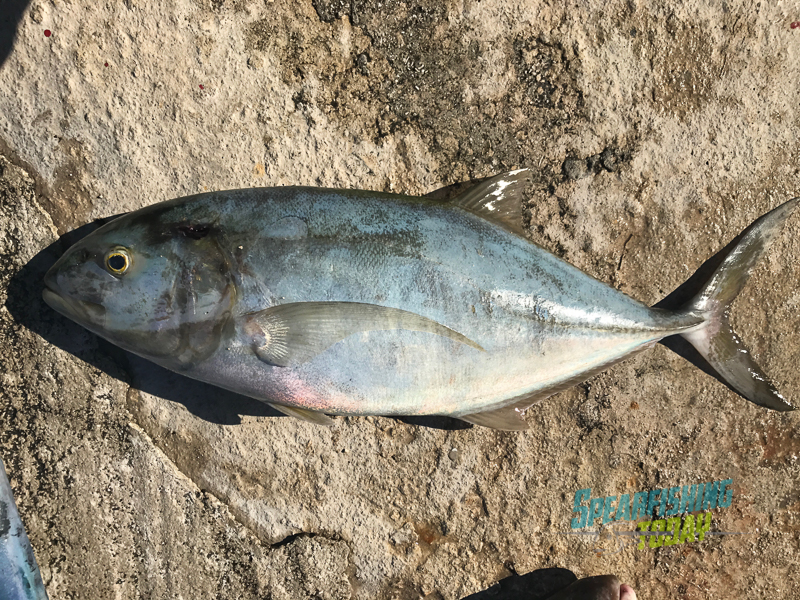 Yellow jacks travel in large schools and are known to be extremely aggressive when pursuing their prey. This species can often be found in open waters or near floating islands of sargassum. Nearshore, they can sometimes be found in seagrass beds. The deeper the water, however, the better your chances of finding a big one.

Would you like to download our new infographic that presents this information in a clear and stunning format? Well, here it is!

And, if you’d like to demonstrate your subaquatic hunting prowess, contact our spearo specialists and book your charter today!