There’s just something primally satisfying about catching the food you put on your plate and providing food for the family in the most natural way possible; but first you have to learn and that’s where Spearfishing Today in Cozumel Mexico comes in.  While I lived half my life in an urban centre, near one of Canada’s largest cities (Toronto), I grew up in a totally different part of Canada. Growing up on the prairies. I spent my summers in northern Saskatchewan, camping, canoeing and fishing. My family are not game hunters but we’ve always given the fish a run for the money. I even have a photo of me at the tender age of four, with the first fish I ever caught. Now living on an island  (Cozumel) in the Mexican Caribbean, my past has taken hold and for a few years now, I’ve been wanting to learn to Spearfish. 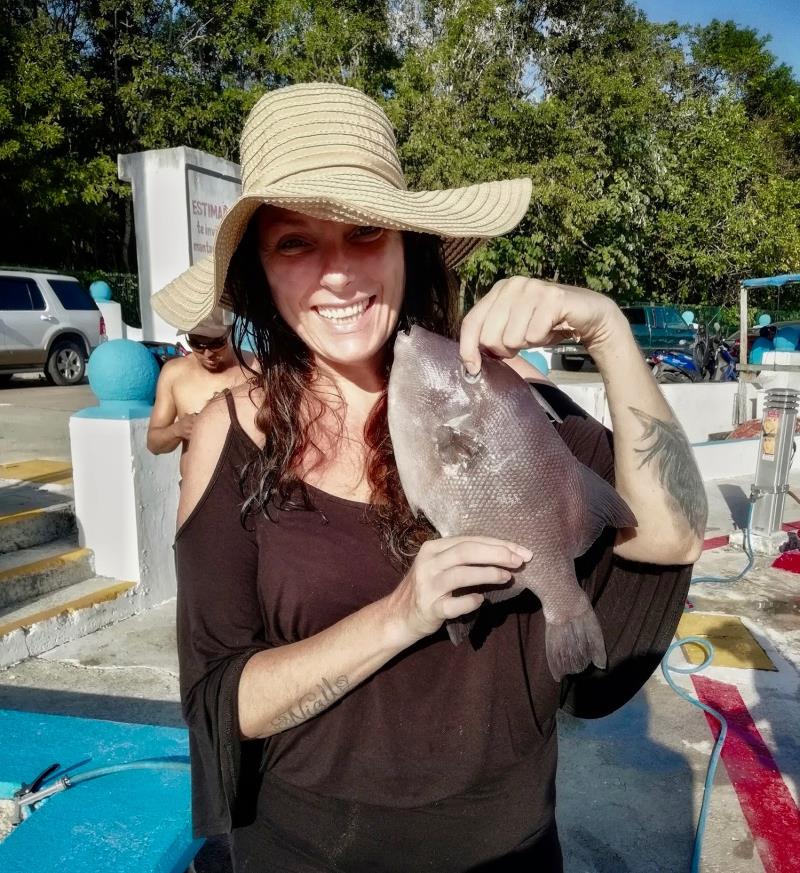 We arrived at Puerto de Abrigo in Cozumel Mexico about 10 minutes before our scheduled time, so we could find the Luz de Mar “Light of the Sea” and our guides, Diego, often called Atún (Tuna) and our Capitán, Manuel. When we arrived, Diego greeted us and introduced us to our Capitán. He explained the Spearfishing waivers we needed to sign and then once we were finished the paperwork, he sat us down on the boat to start the excursion.

Diego is all business. However, his manner was appreciated because frankly, I think letting people loose with spearguns is some pretty serious activity and I wouldn’t want to be out with someone that isn’t clear about how things are to be done or who plays loosely with their (or mine). After all, this isn’t some tour where you sit and chug beers while conveniently trolling for fish. Nope – we were going into the water – with spearguns. 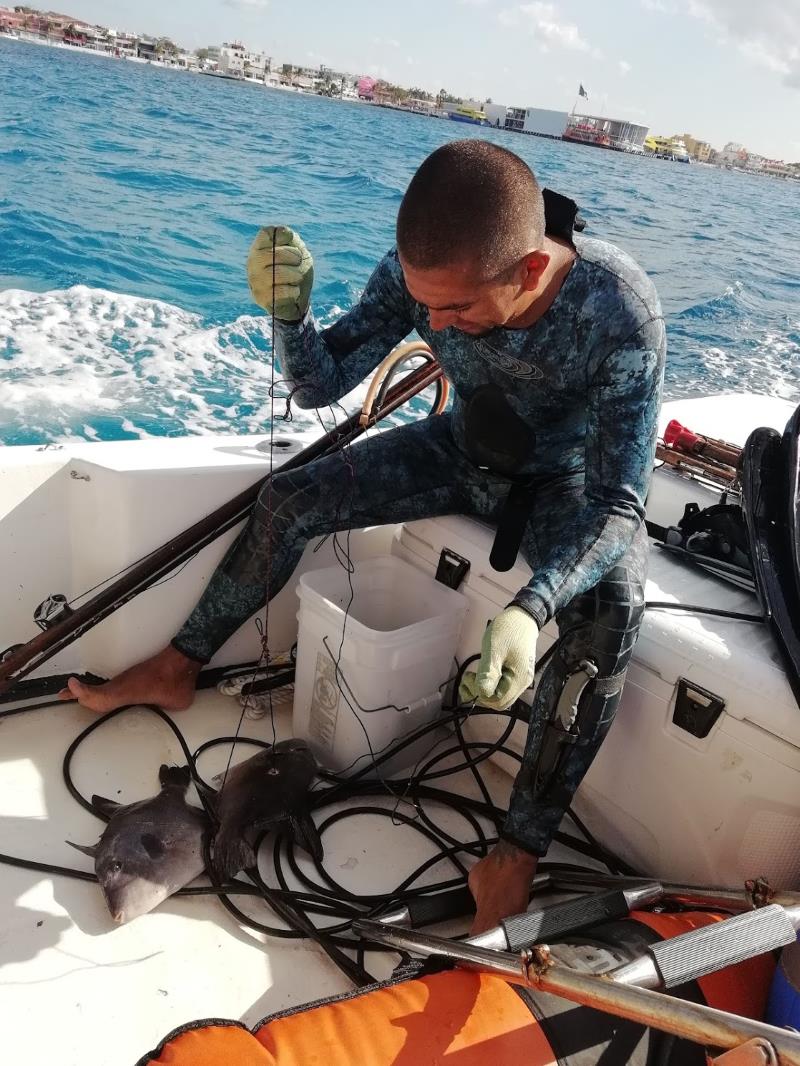 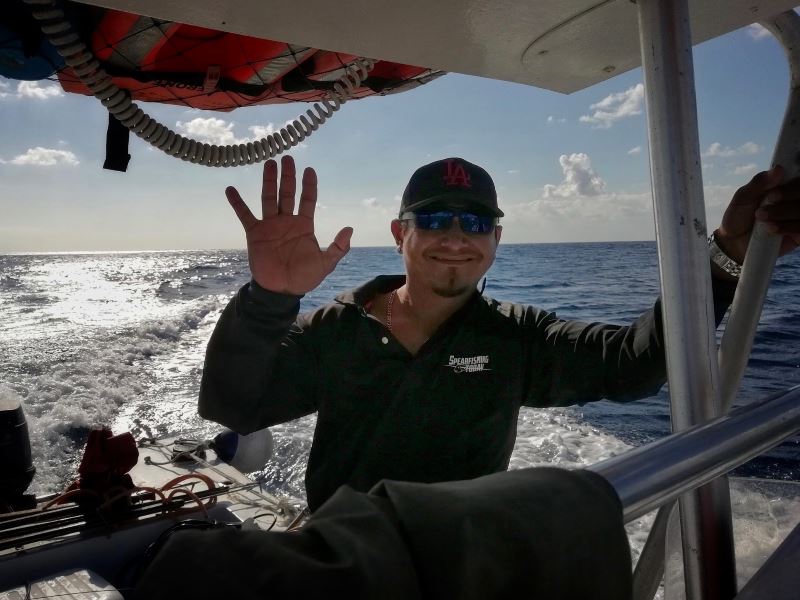 While Manuel guided the boat out of port and onto the open, Mexican Caribbean sea around Cozumel, the first thing we were taught were the rules of the day. Again, Diego is all about safety and the proper way to do things – and he’s very clear about this. Game rules are there for conservation of the species and the dangerous-handling rules are there for the obvious reason – everyone’s safety. Once the conversation of safety for everyone and the game fish description cards were checked over and discussed, it was on to the actual process of learning Spearfishing and how to breath properly while snorkeling and hunting.

Now it was time to actually get into the water and practice! Manuel found us a cool spot right over top a Cozumel shipwreck, where without the spearguns, we could practice the apnea-breathing and descending. It was really amazing to see the wreck. Taking turns, we dove beneath the surface, practising pushing ourselves under without splashing around too much (alerting all the fish!) and then going as far down as we could before surfacing for more breath.

Spearfishing will weed out the weak. I’m not going to lie… You need to be in decent shape and you must be comfortable in the water. You should also be aware, you may be finning/swimming a lot. Fish are funny that way, they don’t just hang out waiting for you. They’re coy. Skulking around the bottom, hovering over coral formations or swimming along with friends…you’re going to have to go find them, follow them and then get down to them. Sometimes waaaayyyy down.

Spearfishing is not easy, so it’s a good idea to get clear on what to expect before you jump in and realize you’re no Robinson Crusoe and that without a debit card and neighborhood grocery store, you’d likely perish. 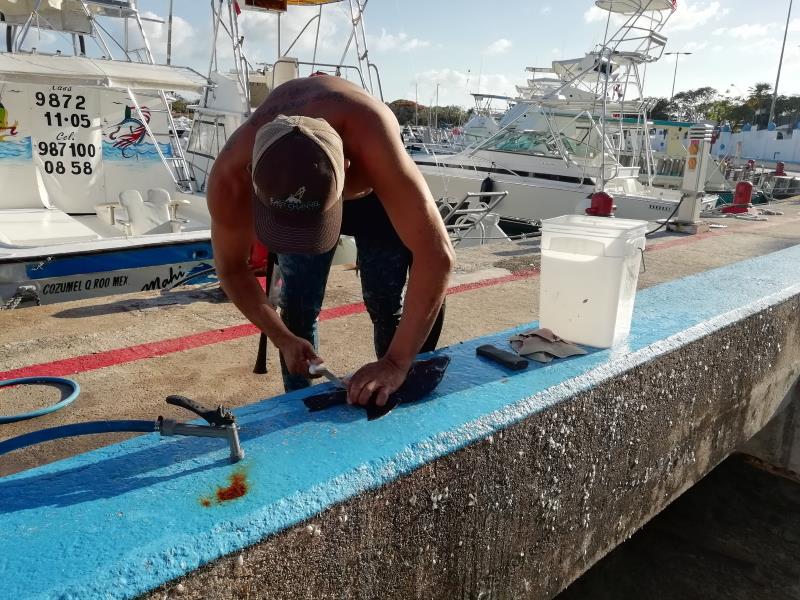 The fact is, if you’ve never done this before, you might not catch a fish yourself. Don’t be disappointed with this idea though. The experience itself is worth it – and you still get to eat anything the guides catch!

Of course it’s also important to point out, while you’re pretty much guaranteed to see fish, it doesn’t mean you’ll see the ones you can catch. Or maybe you’ll see something that’s on the menu…but they’re too small, so again, you’re not allowed to catch them. It is what it is. You can’t control this sort of experience, so hope for the best and enjoy the day, no matter what. 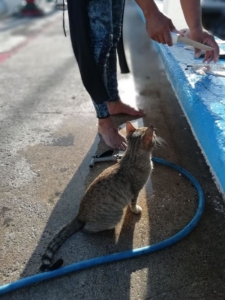 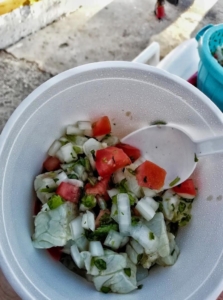 I myself did not spear a fish. Still, I would not trade the opportunity I had to try, in fact, I want to go again even more now. I want the opportunity to try again and really do my best. I will try again – but either way, I swam my butt off and did my best. Both my husband and teenage son bailed before I did HAHAHA!

Overall, I feel this is one of those trips you should do at least twice. Once to get rid of any pre-conceptions and to learn how to do it. The second time – to really go for it, knowing what to do and expect. Didn’t catch and fish…or sadly, didn’t see any to catch? Definitely go on trip Spearfishing number 2 in Cozumel Mexico.