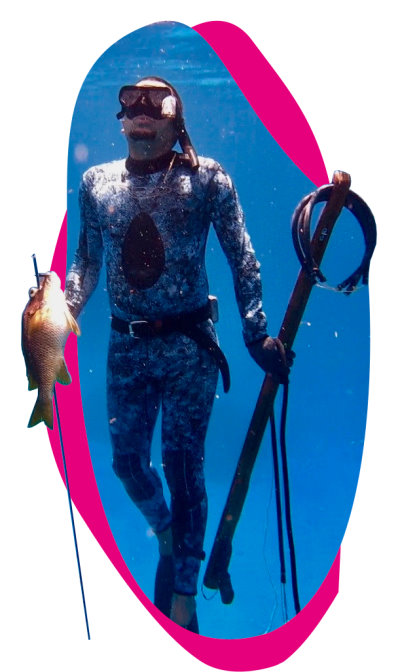 Like any sport, spearfishing is a world in an of itself, where diverse brands compete to provide the best spearfishing gear to their hopefully loyal clients.

As can be expected, the spearfishing equipment you use will, in large part, be dependent upon your environment.

So, for instance, the gear you use spearfishing in San Diego, New Zealand or Los Cabos won’t necessarily be the same as what you would use at Caribbean spearfishing spots such as Cozumel, Cancun or even Florida.

This brief guide is intended to help you understand the different spearfishing gear we use at Spearfishing Today.

As such, we will focus on what we look for in our spearfishing equipment used in the Mexican Caribbean.

That said, however, unless otherwise agreed upon for a private charter, we only supply basic equipment on all our spearfishing trips (speargun, fins, snorkel equipment).

There are basically three types of spears used in spearfishing: Hawaiian slings and polespears, which are the simplest in terms of construct, and spearguns.

Hawaiian slings and polespears are very similar. Both require you to be very close to the fish, which is not necessarily the case with spearguns. The main difference between the two is that a polespear completely leaves your hand when shooting a fish whereas the band on a Hawaiian sling will typically not leave your hand.

Then we have spearguns.

In other words, visibility and fish size will determine the length and power of the speargun you should use.

Another important consideration is the thickness of the shaft. A more robust shaft will add power to your shot but also take away some of the quickness. Basically, the bigger the fish you hunt, the thicker the shaft.

Likewise, you can also find mid-handle and rear-handle spearguns, the former being more ideal for waters where there is low visibility.

Finally, there is a newer type of speargun on the market called roller guns. These spearguns have a couple of more bands which are typically permanently loaded at the bottom of the gun allowing them three times more reach.

At Spearfishing Today, we sometimes hunt in more shallow waters around reefs but also in the deep blue waters of the Caribbean Sea. As such, we choose mid-size, multiple band spearguns that can be used both around reefs and for larger prey.

Since the beginning of 2017, Spearfishing Today’s founder, Leo “Chanoc” Waltman has given up the use of spearguns altogether in favor of polespears.

Polespear, sometimes written pole spears, offer a much larger challenge for underwater hunters. In general, the use of polespears requires being at a much closer distance to the fish. That’s because they have both a lower travel range and a lower penetrating range than most spearguns. 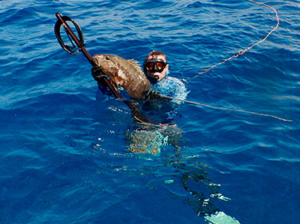 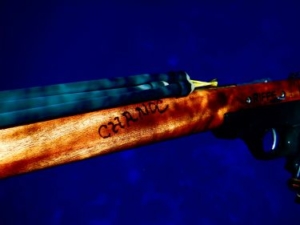 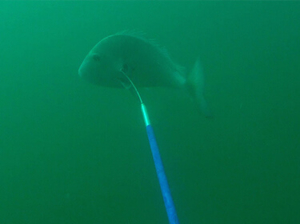 When looking for a good spearfishing wetsuit the main thing you will want to take into consideration is thickness.

Especially in warm climates like the Mexican Caribbean, where year-round water temperatures average from between 77º – 82º F (25º – 28º C) year-round.

As such, we recommend using wetsuits with a thickness no greater than 1.5 mm. If you tend to use your wetsuit in colder waters, ask at your spearfishing equipment shop for the right wetsuit for your particular environment. However, in the Caribbean, you’ll be sweating way more than is comfortable with anything more than that.

In fact, for Caribbean spearfishing, unless you are going to be in the water for a long period of time or performing deep dives, we recommend you only use a rash guard. Make sure you choose a spearfishing rash guard however, which are normally equipped with chest padding (called a loading pad) to help ease some of the pressure from constantly reloading your speargun.

Likewise, most spearfishing wetsuits and rash guards are camouflaged. This is for one important reason: to help conceal you from the fish.

If you really want to get close to your prey, however, consider going truly stealth.

Developed by Hecs, a New Zealand-based tech company, the Hecs Stealthscreen blocks your natural electromagnetic field, creating a sort of invisibility cloak that prevents your prey from detecting your presence. 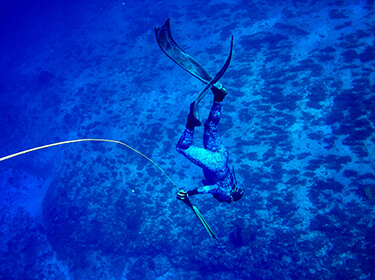 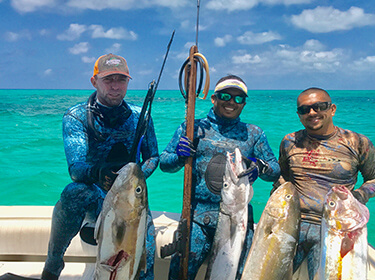 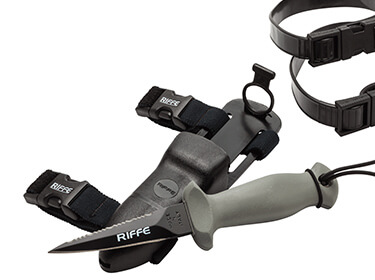 A good spearfishing knife is like any good kitchen knife: always sharp, durable, and doesn’t rust.

Above all, it’s a matter of safety.

For instance, say you spear a fish at 50 ft. and it starts to swim around you, entangling you in the spearfishing line. With a spearfishing knife, you can cut the line and safely make your way back up to the surface.

Some people think that the knife’s primary purpose is to kill the fish. However, that should be done only when needed so as to avoid drawing possible predators.

Quality is also an essential element of any good spearfishing knife.

Many of the knives on the market lose their sharpness and rust rather quickly, which can be a problem if say you become entangled and need to cut the line.

As such, be sure to go for quality over price on this one.

Spearfishing knife brands include and Riffe, Cressi, Beuchat, and Mako. 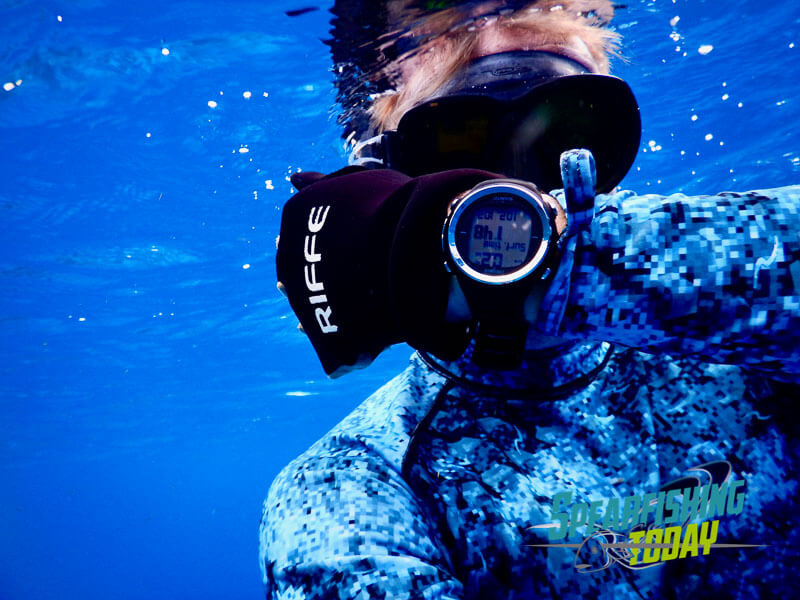 Freediving watches are a great addition for hardcore spearos and freedivers who like to keep track of their depth and dive times.

In fact, if you’re serious about either sport then a freediving watch is a good investment as it helps you keep track of your training and improvements.

When considering a freediving watch, make sure that the screen is easy to read and easily visible with not too many functions taking up valuable viewing space.

Freediving watches should also be equipped with good batteries for long days out spearfishing or freediving in the Caribbean Sea.

For some, heart rate monitors are also important as is the ability to download all relevant information to your computer so that you can keep track of your dives.

When looking for a good spearfishing mask, it’s important to not just grab any snorkel mask and call it a day.

For spearfishing, you’re going to want to look for a low-volume mask. In other words, the amount of air in the mask should be reduced so that when you equalize while freediving you will be dealing with less pressure.

The best spearfishing masks offer high visibility and low-volume. Furthermore, unlike scuba diving or simple snorkeling, the type of lens is also important when choosing a spearfishing mask.

There are basically three types: see-through, amber-colored or mirror lenses. In high visibility waters such as around Cozumel, see-through lenses are perfect. However, in a place like Holbox, where visibility is much lower, colored lenses are preferable as they increase the contrasts and thus allow you to see better. Moreover, out of the water, they make great sunglasses.

Mirrored glasses are intended to hide your eyes. However, as is the case with camo wetsuits, how you move in the water and how fish perceive your energy is much more important than if they see you too.

Once you’ve found your selection of quality masks, the next aspect to consider is just as important: comfort. It doesn’t matter if it’s big or small, but how comfortable you feel wearing the spearfishing mask.

Finally, finding the right snorkel is also important when choosing your spearfishing gear.

Basically, the simpler and more flexible the better. This is especially true when hunting in and around underwater caves, where you run the risk of getting your snorkel caught and maybe even stuck in a coral formation. 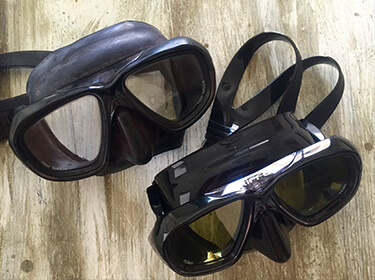 The old rule “the simpler the better” applies for spearfishing gloves.

Gloves should be lightweight and allow you to feel while still protecting your hands.

First and foremost, spearfishing gloves make it way easier to reload your speargun.

Plus, once you actually catch your fish they will help you to avoid cuts and abrasions.

Kevlar gloves tend to be the best.

Freediving fins are extremely important spearfishing gear because they can seriously affect your overall freediving performance.

Good freediving fins will ensure you get the right propulsion as you dive down into the depths of your underwater universe.

However, it’s also a big misconception that large freediving fins will allow you to dive deeper.

In the end, you will be able to dive down as far as your personal limits take you, with or without the fins.

Where they do come into play is when you are capable of deep dives already, as they will help you conserve your energy.

However, freediving fins are not recommended for people who lack experience as freedivers.

Like with other spearfishing equipment, comfort is also an important factor.

In that sense, you should know whether you are more comfortable diving with soft fins, stiff fins or something in between.

There are basically three types of freediving fins: plastic, fiberglass, and carbon.

Plastic fins are economically priced and are great for beginners. Fiberglass not only look nice, but they also require a much lower expenditure of energy than plastic fins when diving down or returning to the surface. Carbon fins are the most expensive, the most delicate, and the ones that will require less use of your dive energy.

However, freediving fins won’t determine whether or not you catch a fish. 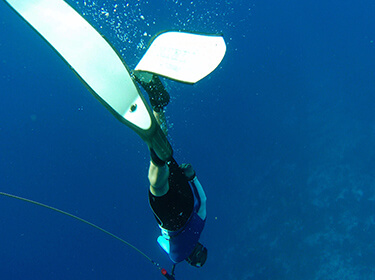 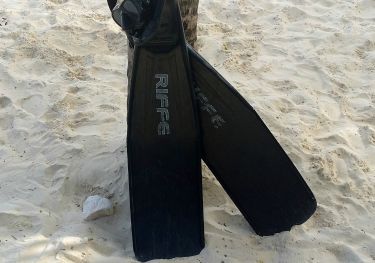 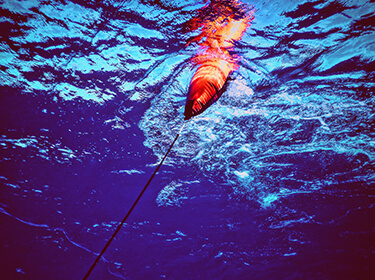 Last but definitely not least: floatlines, floats, and reels.

Say, for instance, all the equipment, practice, and patience has paid off. You’ve just speared a powerful Mahi-Mahi. Just as you are ready to return to the surface, however, your fish has other ideas and heads south into the depths of the Caribbean. You don’t have the breath to keep fighting nor do you want to lose your big catch.

So what do you do?

There are basically two options: you use a reel to bring the fish in once you reach the surface or you attach a floatline with afloat to your speargun and pull in both your fish and the gun once you’ve managed to take in that much-needed breath of fresh air.

Another option is called the breakaway system, which is a float and a floatline connected to your shaft. This system is used in deep blue water where there are no reefs. Once you shoot the fish you take the speargun back up to the surface and begin pulling up the fish using the floatline. Sometimes up to three floats and three lines or bungees are used for big game such as tuna fish.

Here in the Mexican Caribbean, we use the breakaway system with just one float and one floatline.