Spearfishing in Mexico. Be more with Less.

If you think Spearfishing is for wealthy, fearless men and women that kill fish for fun, you are so wrong. At Spearfishing Today, we teach you how to spear a fish or how to become a better, a more selective and sustainable hunter. But here’s the thing: we also spread our vision of life; our values on how to treat the ocean with respect and how to be more with less.

Years ago, when I started to live the spearfishing dream in Mexico, I quickly was realizing that this new lifestyle made it possible to look at life and the world in such a different way. Later, I read a super interesting story written by Courtney Carver who had started a “be more with less” movement.

Inspiration to slow down, reassess, and get real about how you want to live life.

“An American investment banker was at the pier of a small coastal Mexican village when a small boat with just one fisherman docked.  Inside the small boat were several large yellowfin tuna.  The American complimented the Mexican on the quality of his fish and asked how long it took to catch them.

The Mexican fisherman said, “I sleep late, fish a little, play with my children, take siestas with my wife, Maria, stroll into the village each evening where I sip wine, and play guitar with my amigos.  I have a full and busy life.” The American scoffed, “I am a Harvard MBA and could help you. You should spend more time fishing and with the proceeds, buy a bigger boat. With the proceeds from the bigger boat, you could buy several boats, eventually you would have a fleet of fishing boats. Instead of selling your catch to a middleman you would sell directly to the processor, eventually opening your own cannery. You would control the product, processing, and distribution. You would need to leave this small coastal fishing village and move to Mexico City, then LA and eventually New York City, where you will run your expanding enterprise.”

The Mexican fisherman asked, “But, how long will this all take?” To which the American replied, “15 – 20 years.” “But what then?” Asked the Mexican. The American laughed and said, “That’s the best part.  When the time is right you would announce an IPO and sell your company stock to the public and become very rich, you would make millions!” “Millions – then what?”

The American said, “Then you would retire. Move to a small coastal fishing village where you would sleep late, fish a little, play with your kids, take siestas with your wife, stroll to the village in the evenings where you could sip wine and play your guitar with your amigos.”

Spearfishing with us in Mexico stands for accepting the simplicity and purity of hunting for your own food, accepting you might come home without any. Getting food in a sustainable way, food for 1 meal, food to share with friends and family. Spearfishing stands for spending an intense and adventurous time with other people. Let´s Spearfish together, get one fish for lunch and have a long and interesting conversation. Be more with less. 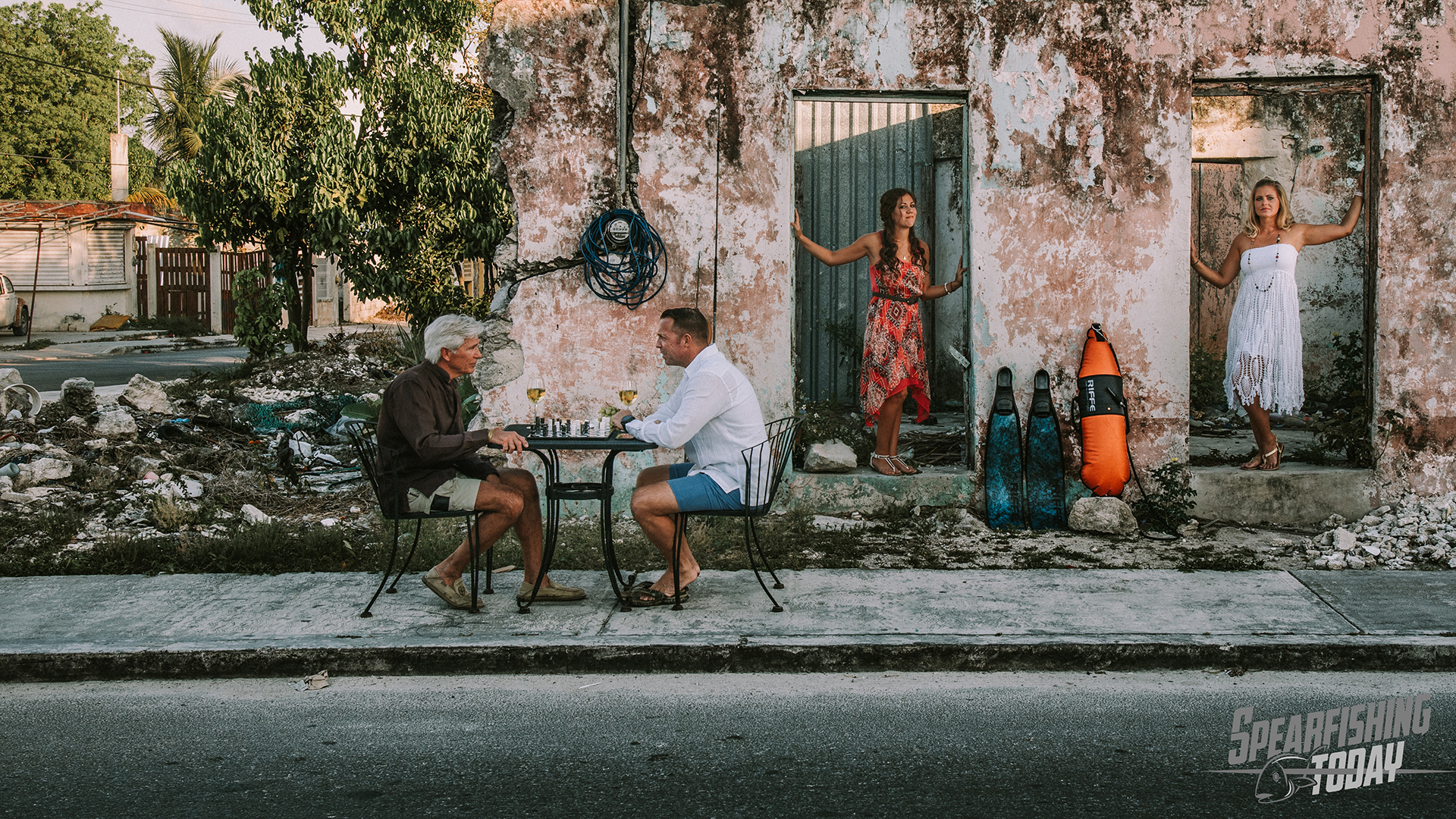 He was one of my first clients when I started SpearfishingToday in Mexico 9 years ago.

Freediving and Spearfishing connected us and Larry became a true friend. We still spearfish quite often. We hunt in Cozumel, in Tulum, in Playa del Carmen and in Cancun. Larry updates me about “the real world”. There have been many times where I’ve leaned upon his words of wisdom.

On the other hand, I balance Larry, being more with less. We freedive and spearfish together in Mexico. We hunt together in the Caribbean Sea, spending hours and hours to get some food (or not). And then we cook and eat our catch and talk, talk and talk.

You can’t put a price on that. That is life, that’s love. That’s being more with less.

Being more with less means we removed / are removing from life what we don´t need. With the purpose to get ready for the life we want to live.

Larry and I just need a mask and a snorkel, a pair of fins and a speargun or polespear.

Join us spearfishing in Mexico: we have the gear to be more with less.

Leo
>Special thanks to:
Larry “one up, one down” May
Flo of Serfati Photography
Mua by Marena SerfatiRiffe